Volunteers and employees from Rabbis For Human Rights were attacked not long ago by settlers from the Itamar settlement, while the volunteers were assisting Palestinian farmers harvesting their olives in the village of Awarta in the West Bank.

The attackers who arrived on foot and on “tractoronim” (small tractors used for racing) sprayed pepper gas at the harvesters. One of the employees of RHR was hurt and needed medical assistance. Volunteers with RHR reported that there was an army presence at the time but that the soldiers barely intervened. 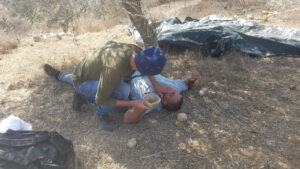 It should be remembered that a similar attack occurred two years ago during the olive harvest when masked men attacked 80 year old Rabbi Moshe Yehudai in the village of Burin and he had to be evacuated to receive medical treatment with fractures in his hand.

Avi Dabush, executive director of Rabbis For Human Rights (RHR) stated “The attack against the olive harvesters today joins a series of such attacks that have been occurring almost daily by Jewish terrorists, sometimes hitting Palestinian farmers, and their property sometimes hitting volunteers aiding the harvest and sometimes also aimed at the army itself. It is high time that someone in the government wakes up and acts to uproot these organizations for Jewish terror and puts out a clear message that violence will be dealt with strongly and with real punishment. Until this happens the next attack is just a matter of time”.

Video footage is linked for free use. Credit: Rabbis For Human Rights 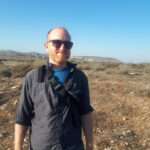 Today I climbed a hill. Together with a group of 20 Rabbis for Human Rights volunteers, we made our way to a Palestinian olive grove not far from the village of Awarta, which is literally and figuratively is shadowed over by Itamar, a settlement in the occupied West Bank. We were there for the same reason that we have gone out (and will continue to go out) nearly everyday since the beginning of the month: To support Palestinian olive farmers who face daily violence and ongoing oppression under occupation.

We come because this system of occupation, which aims to deny Palestinians their basic right to harvest their olives continues.

Israeli imposed restrictions limits the time that the farmers can spend in the grove. This means that a harvest that should take days to complete can take weeks or more. Our presence not only expresses our solidarity but also our desire to help them with the harvest itself.

Similarly, we go out to the groves because sometimes our presence can deter violence from settlers or soldiers.

The bodily harm caused by pepper spray can sound minor to those who have never seen or felt the pain as it burns your eyes and your skin. The harm, both physical and emotional is lasting. It marks us all, but not in the way these settler-terrorists intend. As we were getting ready to leave this afternoon my coworker, with eyes still burning from the pepper spray, looked at me and said, “I am not afraid. We’ll continue this work no matter what”. Indeed, their violence cannot stop the growing movement for a just peace and self-determination. It will not deter us from joining in the call for Palestinian freedom. We will continue this work and we will prevail.