“Turn back, my daughters, for I am too old to be married. Even if I thought there was hope for me… Oh no, my daughters! My lot is far more bitter than yours, for the hand of the LORD has struck out against me.” But Ruth replied, “Do not urge me to leave you, to turn back and not follow you. For wherever you go, I will go; wherever you lodge, I will lodge; your people shall be my people, and your God my God.” Ruth 1:12-16

Preparing for Shavuot this year is very difficult. We are mired in long and hard days of darkness. Thousands are hurt daily by the violence inside of Israel and from the war between Israel and Hamas. 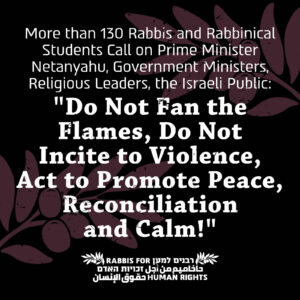 Shavuot, when we mark the giving of Torah, is a call for clarity. Receiving Torah was like receiving a road map to a world that could be chaotic, difficult and confusing. But Torah believes that a different world is possible, a world where we can take on moral codes, and through them perform Tikkun Olam — improve the world. The Torah, in its commandments, gave us its abundance, which became a complete moral system.

Some use Torah destructively and violently. For many years and in particular over recent months we have cautioned that the religious discourse of hate is becoming increasingly dangerous. The most recent elections saw the welcoming into the Knesset those who have turned religious hatred to a flag that they wave with pride towards Arabs, the secular, the LGBTQ community, leftists and more. And this hatred receives the very weighty and clear support of the Prime Minister of Israel.

Jewish discourse of hatred also meets a similar discourse in Islam, which advocates for harming Jews simply because they are Jews, making civilians into targets. When this happens we stand up against all of the hatred that and violence of extremists who seek to set our country ablaze.

I live in Sderot, where I run between worrying about my children and my parents, in their shelters to steadily working to help our neighbors and communities in the area and to lower the flames on both sides of the fence. From here we can see how dangerous hatred is. Twenty years of war between Israel and Hamas seriously hurts the children of Sderot and the children of Gaza in shocking ways. We are faced with the options of fleeing our city or to stay, to take shelter and maybe to get hurt. In Sderot a 5-year-old boy was killed. In Gaza many children have been killed.

From here we not only see the harm that hatred causes but we can also see how good things can be. Sderot and Gaza thrived side-by-side for many years. Even our military leaders understand and are talking about the limits of force. In the days after, which must come now, we must invest all of our efforts in the economic and physical rehabilitation of Gaza as well as taking a diplomatic initiative that will bring peace and reconciliation between Palestinians and Israelis. It will not be easy but there is no other choice.

We’ve become “accustomed” – as terrible as that is – to war with Gaza but the clashes in Israeli cities, mixed and otherwise are even more terrifying. A civil war is the worst possible scenario that has led to the destruction of many other countries. The irresponsible leadership and policies of Israeli authorities at the local and at the national level over the years has brought the instability and violence to oppressed communities in Israel. There is no justification for violence and the state must protect its citizens but it is clear that only a clear and real process of building our common lives – Jews and Arabs together – is the only long-term solution.

In the darkness in which we find ourselves there is hope. Over the weekend thousands of Israelis, Arabs and Jews, went out and demonstrated together against the violence and for our common future. Many of our rabbis were among these demonstrators. This week we also published a meaningful call, being delivered to the President of Israel, from about 160 rabbis calling for religious leaders, for political leaders and for Israelis to lower the flames, prevent war and to refrain from violence.

In these times, as many of us are living with existential fear, it is our duty as religious leaders and as Jews, to allow the light to infiltrate the darkness. Together we will succeed!

“Do Not Fan the Flames, Do Not Incite to Violence, Act to Promote Peace, Reconciliation and Calm!” – Read the press release here