RHR Board Member, Rabbi Noa Mazor offers us a compelling and moving exploration of this week’s Torah Portion, and as is her custom, she incorporates meaningful poetry that assists us in summing it all up!

“And I shall keep faith in the future, Though the day be yet unseen. Surely it will happen as peace will come carrying its blessing from nation to nation.” Tchernichovsky 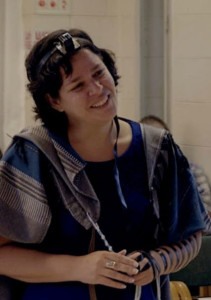 The Torah reading “Toldot” opens with the special promise that Rebecca receives. She is already pregnant, already knows that she will give birth to twins, but she goes “to inquire of God” (“Lidrosh et Hashem”). In response to that inquiry she is told: “Two nations are in your womb, and two kingdoms will separate from your innards, and one kingdom will become mightier than the other kingdom, and the elder will serve the younger (Genesis, 25, 23).

Rebecca’s reaction to this promise appears later in the Torah’s narrative. She takes sides – she helps Jacob through subterfuge receive Isaac’s blessing, and leaves Esau to be the older sibling (“Rav”) who will serve the younger – that apparently is what she believes ought to happen. So too can we learn from the content of the blessing that Isaac gives Jacob. “Nations shall serve you and kingdoms shall bow down to you; you shall be a master over your brothers, and your mother’s sons shall bow down to you. Those who curse you shall be cursed, and those who bless you shall be blessed” (Genesis, 27, 29).

If there is only one possibility – one of us will have to be superior to the other, and so always we will have a problem, will always be in a complex, difficult reality. There will always be one who wins, one who loses…one on top, one below. Between the promise given to Rebecca and Isaac’s blessing of Jacob through his deception and trickery we have another story.

In this additional story there is famine in the land and they have to decide what is to be done, how to deal with it. Unlike Abraham and Jacob who go down to Egypt in the time of famine, Isaac stays in the land and settles in Gerar. But since there is famine in the land and since the widespread approach at the time was as above mentioned: either me or them; one is victorious, the other defeated; one has, the other doesn’t; so there developed a rivalry between the residents of Gerar and Isaac.
And the shepherds of Gerar quarreled with Isaac’s shepherds, saying, “The water is ours”; so he named the well Esek, because they had contended with him (Genesis, 26,20).

But along with the feud an opportunity for change, for healing, presented itself. Change happens when according to the narrative, Isaac distances himself from Gerar and goes back towards Beersheba, and the people of Gerar see that Isaac is successful and prospers, so much so that they decide to make an arrangement, a covenant, with him.
The possibility that rather than war or conflict we can choose the option of cooperation and mutual concern is always there, always in our hands. , It only requires that we change the way we look at things, to change our attitude.

If we believe that it is all either/or – you or me, the territory is mine or it is yours, the pasture is either mine or yours, success is either mine or yours, “the mighty shall serve the younger” – apparently then we will always be in a state of constant war. But if we make that small change, if we search for the possibility of “me as well, as you” i.e. win-win, if we understand that
the land is for all of us: the air, the water, the harvest crops, everything – we will take care of our one world for all of us as a common obligation in order to live in it together. If we fight and don’t take heed of the needs of all the inhabitants of the earth, then it seems we will simply perish together. On the other hand, if we see ourselves as partners in this venture, as profiting from seeing the other as well as ourselves we will be able to nurture and take care of the world for all of us.

This week some of us celebrated the Sigd festival. 50 days after Yom Kippur, in which we do a personal accounting (“Heshbon Nefesh) of our behaviour. The Sigd serves as a kind of communal accounting. If only we could see this communal reckoning as a beginning of our seeing the entire world as one community that would benefit from our behaviour.

Shaul Tchernichovsky (1875 – 1943) the Hebrew writer, in his poem “I Believe” Makes a small change in the words said to Rebecca: instead of “one kingdom will become mightier than the other kingdom, and the elder will serve the younger he imagines an alternative possibility:

And I shall keep faith in the future, Though the day be yet unseen Surely it will happen as peace will come, Carrying its blessing from nation to nation.

In Hebrew it is clear that this is an echo of the Biblical verse, When we work together and not against each other, we will carry blessing and peace, and we will be able to bring peace to the world and to the land, for all its inhabitants. This possibility is in our hands, it is our responsibility to carry it out!

My thanks to my friend, Rabbi Dahlia Shaham, as it was a conversation with her that highlighted the idea for this sermon.