At the BFRHR’s AGM Thursday 3 November 2020, Rabbi Sylvia Rothschild spoke about the relationship between Judaism, Human Rights and Human Dignity.  She has kindly provided her speak notes and the source materials referenced in it which can be accessed here. END_OF_DOCUMENT_TOKEN_TO_BE_REPLACED

As the holiday approaches, Rabbis for Human Rights share a special Shavuot edition of their newsletter.

Shavuot Sameach! This year the festival of Shavuot will be experienced in a different way than usual. In various stages of post-lockdown, puzzling over the cultural, institutional and economic impact of this global crisis, END_OF_DOCUMENT_TOKEN_TO_BE_REPLACED

Avi also wrote a reflective piece on Human Rights, on the occasion of Tu B’Shvat this year, before RHR went out to plant olive trees in the West Bank where they had previously been burnt and uprooted.  Read In the Shadow of an Uprooted Olive Tree here.   END_OF_DOCUMENT_TOKEN_TO_BE_REPLACED

Download our brand new companion of readings for each of the days of Chanukah. Thank you to Rabbi Sylvia Rothschild for compiling the readings. Chanukah Sameach!

Chanukah Booklet (This is the smaller file-size version. If you would like a higher-resolution copy, please email info@rhruk.co.uk)

As part of her course of study, Reut Schwartz, student at RHR’s Beit Midrash for Human Rights – operated jointly with Hillel: The Center for Jewish Life on the Hebrew University Campus in Jerusalem, is conducting her field work at Koach La Ovdim – Democratic Workers’ Organization.  She has taken over the work of last year’s Beit Midrash student Noa Regev as an organizer for afternoon day-care workers in Jerusalem. Soon, the workers will elect a representative committee, which will begin negotiations with the employers (the Jerusalem Municipality and the Israel Association of Community Centers)

“Today, I am doing all I can to make sure that there will be democratic and accessible elections for all the workers,” Reut reported excitedly.

Reut is helping prepare the logistics and content for the elections conference. She is meeting workers in the various neighborhoods, writing letters to voters and making sure that all the workers receive the letters and are aware of the coming elections. Reut is in contact with the workers’ leadership, and at the same time is making sure to mobilize and empower more workers to take on leadership roles. Today, there are two important positions that must be filled: representatives on the elections committee and representatives willing to run as candidates for the workers’ committee. Making the elections accessible to all of them means making sure that each worker has the opportunity to go to the polling place on a day and at a time convenient for her. In addition, Reut is working with the guidance team to ensure that each neighborhood has a representative on the committee because each neighborhood needs its own representative and it is important that each neighborhood is heard in the negotiations with the employers. The success of the elections – regardless of which women will be elected to the committee – will guarantee the livelihood for the women and their ability to have power and influence over their working conditions.

For more information on the work of RHR’s education department click here.

A great deal of effort is made by RHR in Israel to offer teaching on Jewish ethics to young men and women about to start their military service. One important source for their studies is the Israeli Declaration of Independence with detailed references to the traditional Jewish teachings on which it is based. We reproduce below one page from their specially created “Tractate of Independence – Massekhet Atzma’ut” – anyone who would be interested to see more and possibly run some teaching sessions in their own communities should contact Rabbi Nava Hefetz at RHR Israel for more information. 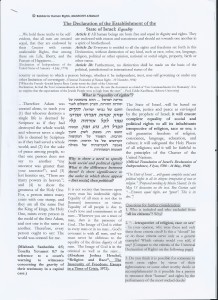 (Testimony written by the servant of Esther in the days of Achashverosh, the king who reigned from India to Ethiopia, over 127 provinces)

You have probably never noticed me in Esther’s book.  I am one of the ‘seven maidens’ given to Esther on her arrival in the harem of the king’s palace. The chroniclers have given us no names, no history, no identity; we are there to take care of the women while they wait to be summoned by the king.

I scarcely remember my own story; I watched my mother and younger siblings die at the hands of Persian forces, sent to suppress the uprising of our city.  I fled into the forest and survived eating berries and leaves from trees and shrubs.

After three days, I was captured by a soldier who brought me to Persia and sold me to Hegai, keeper of the women, and that is how I am here in the king’s palace. We are slaves.  We sleep on old mats outside the chambers of the women who have been brought into the harem.

This woman Esther is somehow different from the others: proud, yet not unkind to us; courageous, yet fearful too.  I feel in her presence a prescient terror of something sinister, not yet revealed. She prays alone, addressing an Unseen Presence in a strange tongue. Some say it is the language of the Jews – Hebrew.  In her face, I see something of my own grief and loneliness and am moved to pity for this woman, also uprooted from the place of her birth.

The king is capricious and irascible, in the thrall of Haman the Agagite.  Haman has got the king to assent to a decree eliminating the Jews – ‘a certain people scattered abroad and dispersed among the peoples.’

We know of this planned genocide even before Esther.  Her cousin, Mordecai, is sitting outside the king’s gate in sackcloth and there is terrible weeping and wailing among his people.  At night, I cannot sleep, imagining that I am witnessing again the decimation of my own people.

‘What is the matter?’ Esther touches my arm gently.  I cannot hide the news from her.  She is distraught.  She confides in me – no one can come into the inner court of the king unless summoned.  ‘Surely I will be put to death.’  Mordecai prevails over her: ‘If you hold your peace this time, then will relief and deliverance arise for the Jews from another place, but you and your father’s house will perish?’

There is an intimate, royal banquet – the king and Esther and Haman – on the first night; and then, on the second night, another banquet is prepared.  As the candles are lit and the food prepared for the table, I listen to the hammering of Haman’s men outside building a gallows for Mordecai.

Tonight I dress her carefully – in a deep purple silk gown that falls to the ground, her waist bound by an embroidered girdle, her head crowned with a diadem of precious stones; her face and throat whitened with lead powder, her lips reddened with crushed mulberry.

I know that her people are sold, to be destroyed, to be slain and to perish – all the silks of India, the dyes of Phoenicia, will not save the life of this woman or her people.  I cannot tell her this, for she is resolute, there is something determined in her expression, a deep and enduring protest against the injustice of the king’s written decree.  I watch her approach the king, confront her enemy and point her finger towards his face.  He has forced himself upon her; she looks away – his face is consumed with hatred and lust, in his eyes a stony godlessness.

They cover Haman’s face – a face that looked only on itself, that was its only self-referent; eyes that averted their gaze from the face of the other lest the soul submit to responsibility, compassion, a moral urge to place others before, even above himself.  They cover his face because he will die alone, because he has betrayed ‘the most basic mode of responsibility’.

Haman will die for his failure to see in the face of Esther a yearning for life – le droit vitale.  U’f’nei Haman chafu – his face is covered to extinguish that asymmetrical look that says: you are an infiltrator, a maggot, you deserve to die.  Esther will live and set her own people free, because she suspends her own natural right to self-survival for the sake of justice and for the sake of the life of others.

I, too, will be given my freedom by Persia’s new king, Mordecai – a freedom that will be difficult, but breathed in a place of peace and truth, of equity and trust.

Rabbi Alexandra Wright is Senior Rabbi at the Liberal Jewish Synagogue, London, and vice-chair of BFRHR.