The Olive Harvest is a unique opportunity for Israeli and overseas volunteers to learn about human rights in the occupied West Bank and stand/act in solidarity with Palestinian farmers who are under constant threats of violence and harassment by nearby settlers. Rabbis for Human Rights is now organizing the annual Olive Harvest for the 18th time. END_OF_DOCUMENT_TOKEN_TO_BE_REPLACED

One of the major focuses of Rabbis for Human Rights work in the Occupied Territories is ensuring Palestinian farmers are given full, safe access to their lands. This is especially relevant for farmers with land near settlements, unauthorised outposts, or near the Separation Barrier. We offer our assistance throughout the calendar, but the most concentrated time of year for this work comes in fall during the olive harvest.

During this time, we bring hundreds of volunteers to work side-by-side with Palestinian farmers. Our presence provides protection against possible settler intimidation, enables farmers to pick within the limited number of days that they can safely do so, and has also become an act of solidarity between Israeli Jews and Palestinians. In the fall of 2019, RHR brought out over 600 volunteers —both international and local — for more than thirty days of work in olive groves in the northern West Bank

In this week’s Torah portion, Ki Titzeh, there is a substantial connection between ensuring justice for the stranger (the Other), the orphan and the widow and our collective will to exploit our national memory so that we may be empathetic towards the oppressed members of our society.

You shall not subvert the rights of the stranger or the fatherless; END_OF_DOCUMENT_TOKEN_TO_BE_REPLACED

With an expired “closed military zone” order the Israeli Army prohibited 200 Rabbis for Human Rights (RHR) activists from planting olive trees together with Palestinian farmers, in the Yaasuf village olive groves, some of which had previously been damaged by settlers.

RHR’s Executive Director, Avi Dabush: “It is incomprehensible why the army interprets planting olive trees and eating dried fruit as ‘an attempt to disturb the public order’. It is clear that the only “order” that has been interfered with was to plant trees in accordance with the traditions of the Jewish holiday of Tu B’Shvat.” END_OF_DOCUMENT_TOKEN_TO_BE_REPLACED

We are writing to you out of deep commitment to Israel and to Judaism.

The Torah teaches us that ‘the stranger who lives with you shall be as a native from among you, and you shall love him as yourself; for you were strangers in the land of Egypt’ (Vayikra 19:34).

Today, the Palestinian residents of Susiya face the imminent destruction of their village, the place they call home. This is scheduled to take place between now and August 3rd. The courts have ruled that 37 structures in the village are due for demolition because they were built without permits, despite the fact the land on which they stand belongs to the Palestinian villagers of Susiya.

END_OF_DOCUMENT_TOKEN_TO_BE_REPLACED

Susiya is a Palestinian village in the South Hebron Hills of the West Bank. The majority of the village is in Area C which means it is under full Israeli control and any decisions about building and civilian infrastructure have to be dealt with by the Civil Administration which is a department of the IDF.

END_OF_DOCUMENT_TOKEN_TO_BE_REPLACED

Rabbis for Human Rights are drawing attention to an interagency call to end demolitions:

International and local aid organizations have faced increasingly severe restrictions in responding to the needs created by the unlawful demolition of civilian property, in violation of Israel’s obligation to facilitate the effective delivery of aid.  In 2013, 122 residential and livelihoods structures provided by international donors were demolished by the Israeli authorities. In addition, at least 65 items of aid, including tents, were confiscated.

The destruction and obstruction of aid delivery is so extensive that this week the International Committee of the Red Cross (ICRC) announced its decision to suspend the distribution of shelter assistance to people whose homes were demolished in the Jordan Valley, where there was a 127 percent annual increase in demolitions in 2013.

In light of the alarming trends, we the undersigned local and international faith, aid, development, and human rights organizations call again for an immediate halt to the demolitions of Palestinian homes, and for Israel to facilitate immediate, full and unimpeded humanitarian access so that aid can reach people in need.

Rabbis for Human Rights opposes violating the rights of suspects under investigation, even in cases of severe hate crimes. Rabbis for Human Rights applauds the signs of a new determination on the part of law enforcement authorities to bring to justice perpetrators of hate crimes (“price tag” attacks) against Palestinian subjects in the West Bank. We are proud that we assisted residents of Far’ata to report the incident of cars being set on fire, and that we connected and mediated between them and police officers, prior to the case being passed to our colleagues at Yesh Din.

However, as much as we would like to see the perpetrators of hate crimes against Palestinians in the West Bank brought to justice, this must not be accomplished through proceedings which violate the rights of the suspects.

At this time, there is reason to suspect violation of the rights of the three suspects who, according to yesterday’s (Feb 5th) reports, were indicted in the car arson in Far’ata. If these suspicions are correct, we view this matter as gravely problematic.

We are aware of the significant difficulty security forces face in gathering evidence against suspects in such crimes, but are certain that there are other means of gathering evidence – which require investment of resources and manpower – which do not violate the rights of the suspects. We wish the security forces complete success in eliminating the desecration of God’s name that is “price tag” attacks.

Read more on price tag attacks on the RHR website. 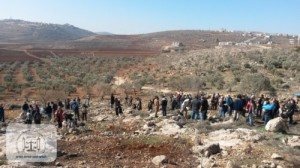 The Palestinian village of Susya located on south of Jerusalem in the West bank has been saved from immediate demolition by Rabbis for Human Rights. The 350 villagers who have five times been forcibly evicted from the land which they legally own have been granted a stay of execution in the Israeli Supreme Court where they were represented by RHR advocates.

The court decided that within 90 days a plan must be prepared for the village which will make clear where houses can be built and the Israeli authorities must also ensure that Palestinian farmers are not prevented from getting to work on their fields. Until now the Palestinians have not been given permission to build houses on their land which has been declared a site of archaeological interest. As the villagers were not offered any alternative place to live, they set up homes in caves adjoining their fields, and when these were destroyed they put up the  tents in which they now live. However Israeli settlers have been allowed to build a village with good houses in the area and Regavim a right wing organisation supporting the settlers presented a petition to the High Court calling for the demolition of the tents and other property belonging to the Palestinians.