I am writing to you following the events of this past Friday, January 21st, that took place in the village of Burin. We were engaged in a tree planting activity together with our friends from the Olive Harvest Coalition, side by side with Palestinian farmers. Suddenly, we were set upon by a group of masked, messianic attackers. There is no other way to describe this attack other than an act of terror. They stormed down from the nearby hill, from the illegal outpost called Givat Ronen, and began to beat activists with their clubs, to stone them and to set a car ablaze.

It is the same story, told over and over again. Only the level of the violence changes for the worse, getting more intense and more dangerous. They seek to impose their version of messianic Jewish superiority. The attack, like others, on the activists and farmers is clearly an expression of their fear of a Judaism that speaks in a different voice that seeks peace and advocates for human rights.

We’ve said it before and we will say it again. The blood of those injured is also on the hands of those who make policy and on the hands of those who are supposed to enforce the law yet fail to do their job and to bring these violent attackers to justice. In the meantime they continue uninterrupted to sow destruction and to inflict terrible injustices in the name of God. Thankfully, against these failures are those who decide to take action, including our friend, MK Rabbi Gilad Kariv, Chairperson of the Knesset Law and Constitution Committee. 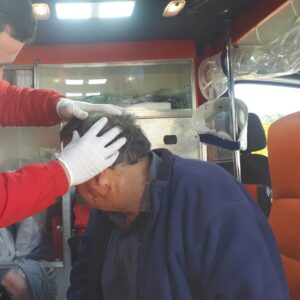 He announced that, in light of this attack, he will hold a special session of the Committee this Tuesday. RHR will be there and we will take part in discussions. We will describe the reality of the Jewish terror that Palestinian farmers and activists face.

We will make one point very clear. If they think that they can use violence to intimidate us or make us stop our activities they are wrong. We will continue with all of our strength alongside our partners, Palestinian farmers in the West Bank, and to stand up against the violence and to make sure that our message of peace and solidarity is clearly heard!

We will return to Burin soon and we will complete the work that these terrorist thought that they could thwart. I ask you to be a part of this and to stand with us as we refuse to turn away from justice. You can take part in our work by making a donation of any amount and support us as we take a stand against the violence!

We are grateful for the support and solidarity that has come from all over the world as we send our message of healing, love and strength to those injured and pray for their speedy recovery!

May the One who brings peace to the universe bring peace to all.